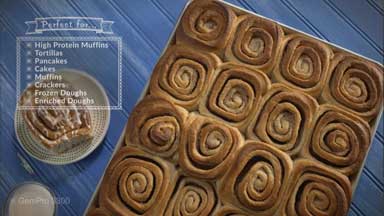 GemPro 3300 is a fun protein to work with because of its ability to perform in numerous applications. It can act as an egg replacer in cookies, a dough relaxer in high protein breads, or as a sheeting improver in crackers.  And the best part of all? It pulls in air during mixing to create a foam which is particularly useful in the production of sweet goods.

We showcased GemPro 3300 as a sheeting improver in a delectable cinnamon roll formula.  GemPro 3300 improves machinability of the dough by both strengthening and relaxing it as it processes.  This creates a soft and tender cinnamon roll with thin and even layers that tastes as good as it looks.